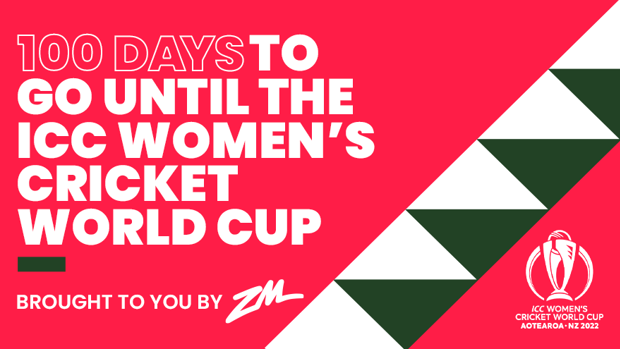 From Wednesday 24th November we're on the countdown! 100 days to go until the ICC Women's Cricket World Cup begins in Aotearoa.

The superstars of international women’s cricket are coming to a ground near you to face off for the game’s most prestigious prize: the ICC Women’s Cricket World Cup.

Our very own New Zealand team will be out to claim the Cup for the first time since 2000. To do so they’ll need to get past global superpowers Australia, India, South Africa and reigning champions England, plus three qualifiers from a host of nations lining up to claim the final three tournament berths. Auckland, Hamilton, Tauranga, Wellington, Christchurch and Dunedin combine to host 31 matches over 31 incredible days.

The eight-nation tournament beings with the WHITE FERNS featuring in a bumper opening match at Tauranga’s beautiful Bay Oval, and will be capped by a spectacular final under lights at Christchurch’s Hagley Oval.

Buy your tickets at tickets.cricketworldcup.com now!